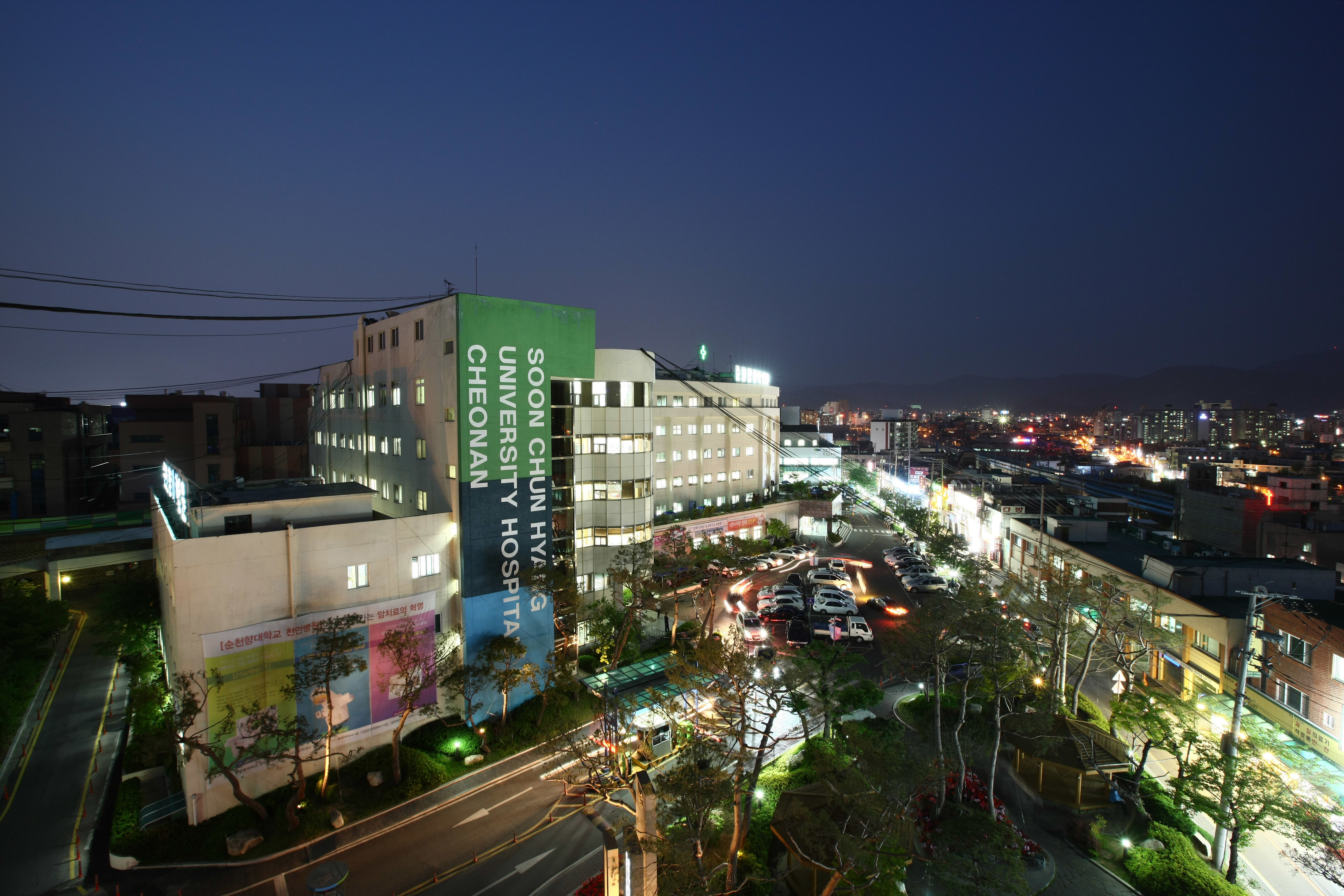 Soon Chun Hyang University Hospital Cheonan is
A representative medical institute of the central region of Korea with the leading stature in all functions including education, research and medical patient care.

It has 34 medical departments and 899 beds. More than 300 excellent professors and 2,000 faculty members inspired by love for humanity provide the high-quality medical care services to more than 3,000 outpatients a day and 400,000 inpatients a year.

Since its opening in 1982 as the only modern general hospital in Chungnam, Chungbuk, and Southern part of Gyeonggi, which have been a “medical waste lands,” it has supported the local development, firmly protecting the health and life of residents in the central region of Korea. Establishing numerous medical and research achievements including development of the world’s first treatment for poisoning of pesticides, cadmium, posions, etc. for the past 40 years, it has been positioned as the base hospital in the central region.

Soon Chun Hyang University Hospital Cheonan is a state-certified best-known medical institution that has earned the first grades in all evaluations conducted annually as an institution for pneumonia, stroke, blood dialysis, emergency, as well as four cancers: colon cancer, breast cancer, lung cancer, and stomach cancer. With its outstanding capabilities and achievements in cancer treatments, it has been sought for by cancer patients from Korea and abroad since 2009. It operates two radiation therapy machines with the greatest performance in existence and has performed the most radiation treatment cases in areas other than the metropolitan area. It also operates a clinical research center with Korea’s best R&D infrastructure where studies on new anticancer drugs and new cancer treatments are actively conducted.

As the hospital established by Dr. Suh Succ-Jo, the most excellent stroke specialist, even the Stoke Center has a high statute. It has been operating the acute stroke treatment system for 24 hours a day and 365 days a year since 2007 and the government has also been certified as the best hospital in adequacy evaluation of stroke that has been performed by the government for 7 years. By performing more than 200 intravenous surgeries annually, it protects the health and life of patients with stroke and cerebrovascular diseases.

It has the highest level of competence in the field of emergency medicine. Since 2010, it has particularly established next-generation emergency rooms by opening and operating separate pediatric emergency rooms completely separate from the emergency rooms for adults for the first time in Korea. Still, it operates the only pediatric emergency center in the central region. It has operated the excellent neonatal intensive care center, where high risk infants born with congenital diseases such as heart disease or premature babies weighing less than 2.5 kg can be safely taken care of with optimal treatments for them, for Chungnam for more than 10 years.

It has developed correctors for perfectly correcting common congenital chest malformations pigeon chest and funnel chest without opening the chest and surgical operations and has a lot of patents including international patents. The clinic for pigeon chest and funnel chest at Department of Cardiovascular and Thoracic Surgery is a well-known center for growing adolescents by providing the safest and perfect correction therapies in Korea.

Soon Chun Hyang University hospitals have Korea’s best know-how in advanced obesity surgery. Soon Chun Hyang University Hospital Cheonan is also actively operating the clinic for metabolic and bariatric surgeons who have been officially certified by the Korean Society for Metabolic and Bariatric Surgery. Recently, it provides new healthy lives for increasing morbidly obese patients and thin patients with diabetics who cannot be treated with drugs by giving various and safe surgical operations.

Soon Chun Hyang University Hospital Cheonan provides excellent medical care activities as a lifeguard and also faithfully educates and trains health and medical service personnel inspired by the noble and sublime sense of duty as a training institution under affiliated with Soon Chun Hyang University that practices its philosophy of establishment “love for humanity”. By providing a variety of medical education programs from the education of medical school students (in medical science and nursing science) to education of residents and medical technicians and also to continuing education to improve the treatment levels of local medical practitioners, it has been positioned as a comprehensive medical training institution for domestic and foreign medical personnel.

Soon Chun Hyang University Hospital Cheonan is seeking to build a new hospital with a state-of-the-art futuristic medical system. The new hospital will be built right behind the current hospital. The site construction work has been completed and it is now at the construction design stage. It is about to construction.

After the construction of the new hospital, a ‘bio medical cluster’ will be formed, connecting the existing hospitals, College of Medicine of Soon Chun Hyang University, and Soon Chun Hyang Institute of Medi-bio Science (SIMS). Based on the ultra-large advanced medi-care infrastructure of the new hospital, advanced medical education capabilities of Soon Chun Hyang University, and the research capabilities of the SIMS which is parallel to the Weizmann Institute of Science in Israel, the advanced hub for biomedical science that the world watches is about to be created.